After receiving and performing initial tests, the patient will refer to the clinic for scanning the whole head and analyzer of the skin and hair one day before surgery. At this stage, scanning of the scalp and the full range analyzer of hair in the above-mentioned devices Advanced SuperFUE gives you valuable information as follows. 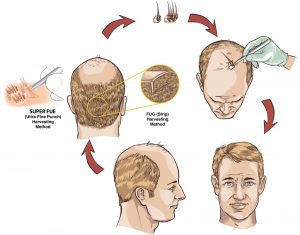 Analyzer and scan of the hair removal area obtained after the computer analyzer of valuable information as follows.

After designing the line, the line is designed in accordance with the standard and the acceptance of the applicant by taking a few cc of blood to separate the stem cells of the individual, the hair transplant begins.

The blood is placed inside a SuperFUE machine, which is ready after half an hour of isolated stem cells, which is actually used to maintain the patient’s tissue after the end of the design of the planting area and the line of emergence and preparation of the area for planting with the device SuperFUE, equipped with intelligent sensors, according to the analysis, is beginning to recognize the scanned follicles that have the maximum capacity in terms of thickness and multiplicity of roots. It is worth noting that at this stage, due to the intelligibility of the device and Computerized analysis. Maximum percussive harvesting of multi-root grafts (4 to 5 times more). The SuperFUE machine does not cause any damage to the root of the hair that is harvested due to the intelligence of the blade. Due to its unique method of harvesting, the texture is harvested with the least damage in the least amount of time without leaving the scar. And recover. Considering the intelligent choice, the best grafting of the stems and the determination of the hair extension and the accurate estimate of the tissue yield after a period of 6 to 9 months, at least 4 months earlier than the previous methods, with a density of more than 4-5 Equality is best achieved through planting. In this method, because of not using the surgical technique and the special method of hair removal from the back of the applicant, there is no need for postoperative rest, and has the least postoperative recovery compared to all previous methods. 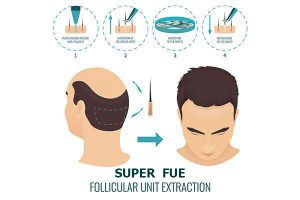